Is the NFL Draft Illegal? 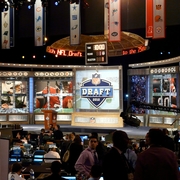 Sports may be on hold for the foreseeable future due to the ongoing COVID-19 pandemic, but that has not stopped the world of sports from moving forward. Between the early introduction of ESPN’s Michael Jordan documentary, “The Last Dance”, and the annual NFL Draft, the sports world is keeping fans at ease. This year’s NFL draft was unique compared to years past; because of the state’s restrictions on mass gatherings, the draft had to be held virtually. Sports have proved that they can work from home with the 2020 NFL Draft scoring record ratings. The Draft's first night drew a record 15.6 million viewers across majors TV networks, a 37% increase over last year. Every year is the same song and dance: the draft is held in April and sports fans watch attentively as their teams build for the future. But no one ever poses the question: is the NFL draft legal?

It is impossible to expect the average sports fan to understand the legal mechanics behind everyday league operations. The NFL draft being one of those operations that seem like a brilliant idea to promote competitive balance throughout the league, despite technically being illegal. Collegiate athletes who aim to play in the NFL are unable to market themselves in order to get the best job and the highest earning salary. They have just one place to go, the team that drafts them.

Antitrust laws are statutes developed by the U.S. government to protect consumers from predatory business practices. They ensure that fair competition exists in an open-market economy. One of the leading pieces of legislation that protects against antitrust violations is the Sherman Antitrust Act. The NFL draft itself violates section 1 of the Sherman act. Section 1 states: “[e]very contract . . . in restraint of trade or commerce among the several States, or with foreign nations, is declared to be illegal.” The Draft constitutes an unreasonable restraint of trade and commerce as it allows owners to suppress salaries and prohibits owners from bidding for the best college players. If not for the draft, players would be able to negotiate a more lucrative contract prior to entering into the NFL.

Rookies have never been able to choose which team they want to go to, but prior to 2011, incoming players were able to negotiate very lucrative rookie contracts that exceeded veteran deals. Under the old collective bargaining agreement (CBA), rookies had the ability to hold out in order to maximize the amount of money their contract could be worth. This caused some teams to trade down in the draft in order to avoid paying rookies exorbitant salaries. The new CBA wanted veteran players, who were “deserving” of lucrative contract extensions, to make as much money as they possibly could. This forced rookies to follow a CBA where they have no negotiating power over their own contracts. The 2011 CBA was used as a salary suppression tactic that is a clear violation under antitrust statutes. Former first round quarterbacks like Sam Bradford and Matt Stafford were able to sign deals worth more than $70 million prior to 2011. First round quarterbacks after the new CBA were impacted dramatically, the best example being Cam Newton who, in 2011, signed a rookie deal worth more than $50 million less than those of Bradford and Stafford. So if the NFL draft is a clear antitrust violation, then how is the draft able to take place year after year?

Players in the past have challenged the NFL Draft’s legality in relation to antitrust statutes but to no prevail. The most famous case involved former first round pick James “Yazoo” Smith, who argued that he could have negotiated a more lucrative deal if it was not for the Draft. (see James Smith v. Pro-Football, 420 F. Supp. 738.) Yazoo Smith suffered a career ending neck injury in his rookie season and was only guaranteed his $50,000 under his contract rather than the money he would have been worth if he had negotiated the contract himself. Smith won in district court and was ready to win when the league appealed. The U.S. Court of Appeals for the District of Columbia Circuit held that the “draft inescapably forces each seller of football services to deal with one, and only one buyer, robbing the seller, as in any monopsonistic market, of any real bargaining power.” But this landmark decision for Yazoo Smith, that should have eliminated amateur drafts in all professional sports, no longer mattered with the creation of the NFLPA.

The National Football League Players Association, or NFLPA, is the labor organization representing the professional American football players in the NFL. The purpose of the creations of the NFLPA in 1956 was to provide players with formal representation to negotiate compensation and the terms of a CBA. Because the NFLPA is a union, they are exempt from U.S. antitrust laws. Abusive business practices that would normally be antitrust violations suddenly become legal if they are performed as part of a collective bargaining agreement with a union. Non-statutory labor exemptions were created by Supreme Court decisions in the 1960s and 1970s. (see Meat Cutters v. Jewel Tea, 381 U.S. 676; Connell Co. v. Plumbers & Steamfitters, 421 U.S. 616.)That meant the leagues could still hold their drafts as long as they could get the unions to agree to them.

The only path to rid the league of amateur drafts that are collectively bargained for is not to sue the league, but to sue the union. NFL players have recently made significant progress to protect players’ well being in regards to player disabilities and safety, so now future players have the same opportunity to be heard. When watching the draft sports fans should always keep in mind that collegiate athletes have been systematically deprived of their bargaining power with the implementation of the NFL Draft. And remember that the NFLPA has allowed for the legality of this draft, despite it being a salary suppression tactic. The NFL draft will continue to exist, but that does not mean it is fair and equitable and hopefully future players will be incentivized to take action against the Players Union in order to bring fairness and equality when players are negotiating the value of their football related services.

Trevor Brown is a 2L at the University of New Hampshire School of Law. If you have any questions feel free to email Trevor at tb1156@unhlaw.unh.edu