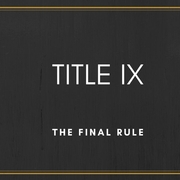 On May 6, 2020, the U.S. Department of Education issued its long-awaited Title IX regulations (hereinafter referred to as “the Final Rule”), impacting the potential liability of educational institutions in terms of their response to allegations of sexual harassment and implementing new criteria relating to due process and other concerns.  Educational institutions must ensure they are in compliance with the new requirements by August 14, 2020, at which point the Final Rule will have the force of law.

The Final Rule replaces the Department’s prior guidance dated September 22, 2017, which itself withdrew the April 4, 2011 “Dear Colleague Letter: Sexual Violence” and the April 29, 2014 “Questions and Answers on Title IX and Sexual Violence”. It makes certain alterations to the proposed Title IX rule that was issued on November 16, 2018.

Institutions of higher education in particular will see substantial changes in the requirements impacting both their potential liability and the level of due process required under the Final Rule.  Many of the provisions raise questions and concerns which both K-12 and post-secondary educational institutions that are recipients of federal funds (hereinafter “schools”) will need to consider carefully in order to maximize their protection of those victimized by sexual misconduct while simultaneously providing due process to those accused of perpetrating it.  While this article focuses primarily on post-secondary institutions and the impact of the Final Rule on them, it raises issues for consideration by K-12 institutions as well.

A few examples of the changes in the way schools are expected to comply with Title IX, based on the Final Rule, are discussed below, along with commentary we have provided with regard to issues that schools may wish to consider in relation to certain new provisions.

…conduct on the basis of sex that satisfies one or more of the following:

(2) Unwelcome conduct determined by a reasonable person to be so severe, pervasive and  objectively offensive that it effectively denies a person equal access to the [school’s] education program or activity; or

Note that dating violence and stalking have not previously been considered within the definition of “sexual harassment” under Title IX.

As clarified by the Department of Education, the U.S. Supreme Court has held that Title IX governs misconduct by the schools themselves, as opposed to teachers, students or other third parties. It is the conduct of the schools, and how they respond to allegations of sexual harassment, that is at issue. Thus, the regulation makes clear the parameters around potential liability on the part of schools.

Schools will not be liable under Title IX if they choose not to investigate allegations of sexual misconduct that occur off campus and in circumstances over which the school had no control or sponsorship. The Final Rule does clarify that off-campus housing recognized by the school, such as a fraternity house, is considered a part of the campus for this purpose, but schools are not liable under Title IX for failure to pursue discipline for other off-campus actions, including those occurring outside the U.S. (e.g., in a school-sponsored study abroad setting).

However, in the interest of protecting their students from abuse, if both the reporting party and the accused are students at the school, should the school investigate such cases regardless of the location in which the alleged abuse occurred?  What if the accused is a student, but the reporting party is not?  Is the accused a potential perpetrator of sexual violence upon other students of the school, suggesting that an investigation is warranted? The Final Rule makes it clear that schools may choose to pursue action against alleged abusers under other provisions of their disciplinary code.

The Final Rule also limits the circumstances under which a school is deemed to have knowledge of an alleged instance of sexual harassment for purposes of sanction under Title IX.  As to post-secondary institutions, the bulk of school employees are no longer deemed “responsible employees,” to whom a report of sexual harassment has in recent years been viewed as constructive notice to the school of the alleged misconduct regardless of whether the individual employee reports up the chain to ensure that action is taken.  Now, in post-secondary institutions, actual notice must be received by “an official of the [school] who has authority to institute corrective measures on behalf of the [school].” In K-12 institutions, a school must now respond when any employee has notice of an allegation of sexual harassment—an expansion of their responsibility under prior guidance.

While the reduced risk of liability may be welcome news, schools will want to think carefully about their internal reporting policies. Some advocates fear that, taken to the extreme, this change could lead to suppression of reporting.  A school that requires all employees who receive a report of sexual harassment (other than those who have a confidentiality privilege with the reporting student) to convey it to those with authority to institute corrective measures will be in a better position to protect its students.   Students will also have far greater confidence in a policy that encourages them to report alleged sexual harassment to anyone with whom they have a relationship of trust, and the students will consequently be more likely to report having been victimized.

In order to encourage reporting, the Final Rule does expand the obligation of schools to ensure that the school community is aware of the identity of the Title IX Coordinator and how to contact the coordinator.

A school will not be deemed “deliberately indifferent,” triggering liability under Title IX, unless (1) it had actual knowledge of the allegation as that is defined by the Final Rule and (2) the unwelcome sexual conduct (other than employee-involved quid pro quo conduct or sexual assault, stalking or domestic violence as defined by law) is so severe, pervasive and objectively offensive as to effectively deprive a student of equal access to the school’s educational programs or activities.  Nonetheless, schools will want to view sexual misconduct allegations through not only the prism of Title IX but also the prism of a student conduct code and principles of good conduct.

The Final Rule requires that post-secondary schools hold live hearings in cases that fall within the Title IX umbrella and provide for cross-examination of witnesses by advisors representing the respective parties. (This requirement does not apply to K-12 schools.) If a party does not come to the hearing with an advisor, the school is obligated to provide one. Should any party refuse to submit to cross-examination, the decisionmaker may not rely on any statement of that party in reaching a determination, but also may not draw a negative inference from the party’s refusal.

The stated goals of the cross-examination aspect are to bring fairness to the process and to ensure that the individual adjudicating the issue can best assess the true facts of the case.  However, it is easy to visualize the potential for intimidation of the alleged victim of harassment in such a process. The Final Rule thus makes certain provisions that appear intended to mitigate the risk of such intimidation.

First, the school must provide the capability, at the request of any party, to hold the hearing in such a manner that the parties are in separate rooms, with video capability permitting them to see and hear each other. Second, cross-examination may only be conducted by the respondent’s advisor (who may be, but need not be, an attorney), and, in the words of the Final Rule, “never by a party personally.” Third, the decisionmaker is to determine the relevance of questions and evidence and is not to permit questions or evidence that (s)he deems irrelevant based on training which must be provided (see below). In making such determinations, the decisionmaker must apply “rape shield” provisions, severely limiting the circumstances in which questions may be asked, or evidence offered, about the sexual history of the victim.

Schools will be well advised to look carefully at the extent to which they can minimize intimidation of the alleged victim while ensuring due process for the accused. The management of the cross-examination requirement is a critical aspect of that need for balance.

Other aspects of the Final Rule – such as which standard of evidence to use, the right to an appeal and the availability of informal resolution processes – challenge schools to determine how best to create an environment free from sexual violence while providing required due process to both parties. For example, schools may apply either a preponderance of the evidence or a clear and convincing standard when determining if sexual misconduct occurred, but must apply the same standard to all formal complaints of sexual harassment against students, faculty and other employees.

Another stated goal of the Final Rule is to achieve more balance in the complaint adjudication (grievance) process, including applying a presumption of innocence, requiring schools to implement procedural safeguards for both parties, and providing the right to appeal an adverse ruling equally to both parties based on an allegation of: a procedural irregularity that affected the outcome of the matter; newly-discovered evidence that could affect the outcome; or the Title IX coordinator, investigator, or decisionmaker has a conflict of interest or bias that affected the outcome. The school may in its discretion permit both parties to appeal on additional grounds.

Finally, schools will be permitted to use informal resolution processes to resolve sexual misconduct complaints, but only if both parties voluntarily agree in writing. Through these options, the Department is emphasizing a focus on adequate due process protections and procedural safeguards for both reporting and responding parties.

The Final Rule is quite specific as to the training that must be provided for Title IX coordinators, investigators, decisionmakers, and those who facilitate informal resolution proceedings. All must be trained in the definition of sexual harassment, the scope of the school’s programs or activities subject to Title IX, how to conduct an investigation and grievance process, how to serve impartially, “including by avoiding prejudgment of the facts at issue”, bias, and conflicts of interest. In addition, specialized training is to be provided to certain of these participants based on their individual roles. All training materials must be made publicly available by the school.

This article does not address all the provisions of the Final Rule, rather calling to the attention of schools some of the issues requiring review in order to ensure compliance with the law. In addition to these and other considerations, the new Final Rule will also have an impact on resource needs and other matters for schools working to implement them.  All these issues, and more, will require careful analysis and policy revision. Many aspects of the Final Rule, while providing due process protections to both parties, also carry with them the risk of suppressing reporting and/or intimidation of the reporting party; so decisions on implementation must be made carefully and strategically, always with an eye toward protecting students from victimization while at the same time providing appropriate due process to both complainants and respondents.

As previously indicated, the Department has required that schools attain compliance with these new and significant changes in the Title IX landscape by August 14, 2020.  Given the need for policy review and revision, the communication of the policy changes throughout the school community, and the provision of appropriate resources to meet the new requirements, this deadline for compliance will require schools to act promptly.